Roman F is selling his original Buchla Music Easel/208 but without the
touch keyboard, the 218. 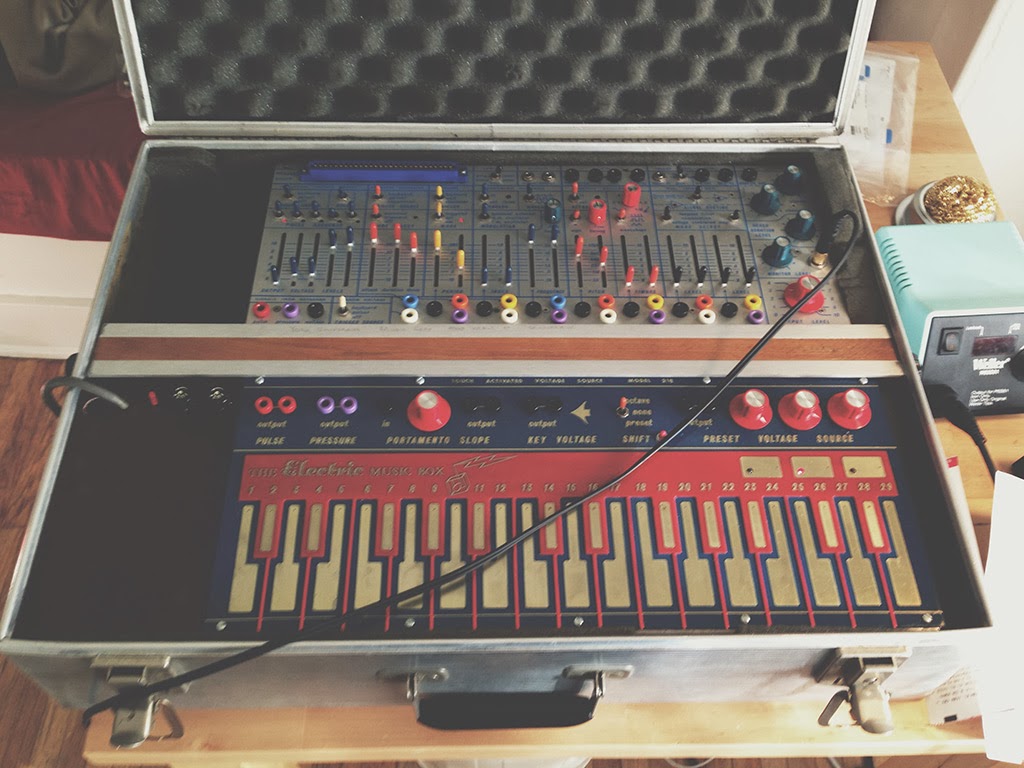 all is original and works perfect

i'm not interested in selling the 218 atm, but since i don't want to break this unit apart i can trade it to 221.

... that's a york university's easel, later owned by audities, then by couple private persons and i'm the last owner.

Check it out on muffs.
Eingestellt von Abendrot um 09:38 1 Kommentar:

It took me a while to get it the way I wanted it....
Eingestellt von Abendrot um 19:45 Keine Kommentare:

The Skylab has landed!! 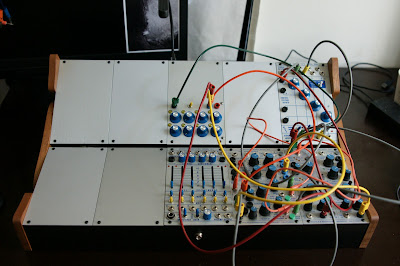 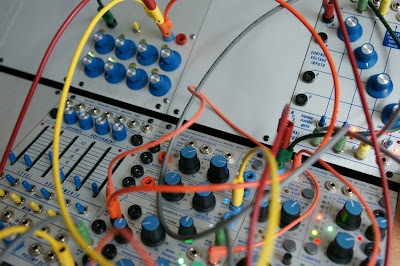 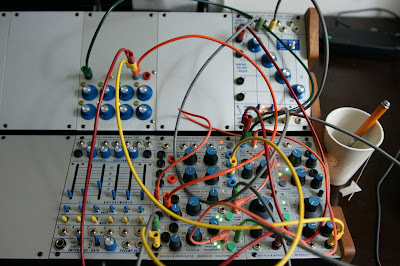 Skylab on the workbench!!!

My Skylab is beeing build right now by BEMI. Just a couple of days away. I feel like Kirk sitting on his futuristic concept car from the 60's. 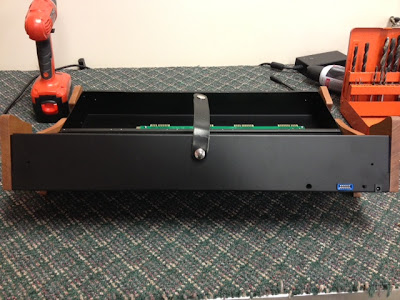 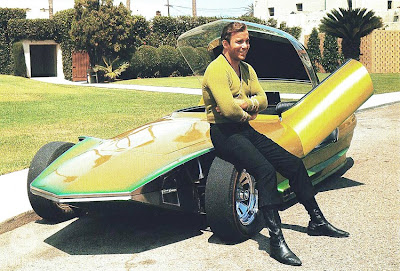 With my Skylab only two weeks away from delivery I tought I take a picture of the modules that are waiting for it. Not much but I think I will have a lot of fun with those five modules. 281e is next as well as some Module Modules with the Timbre from Roman already on order. 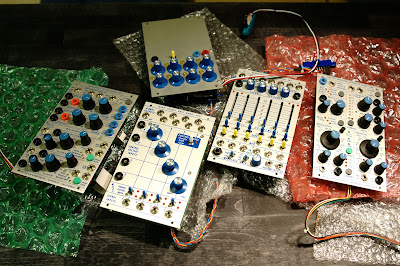 Someone got lucky and bought the 204 that was for sale a couple of weeks ago.  The nice thing is that it didn't vanish in some studio but ended up with Votek_Mendo a fellow wiggler from muff's who has shared some really nice pictures of the 204. Congrats again on the amazing purchase and thanks for sharing all this nice pictures.

So, this module is from 1971, which means it was in the heart of the "black knob era". It wants +15, -15, +5, +24 and 2 grounds. The control voltage range at that time officially was 0-15 volts. The power connectors were black Cinch-Jones box connectors on individual chassis boxes that sat inside of a wooden cabinet.

A friend of mine have done away with all of that. It now will plug into a 200e or later 200 cabinet with an EDAC 10 pin edge connector and doesn't need a 24 volt line. The joysticks will put out roughly 0-12 volts and the CV inputs respond through their entire range from 0-10. This module will now plug and play in a 200e system. It actually was mostly working. The only issue was that the joysticks are optical. They have a lightbulb on the PCB and 4 photocells facing up around it. The joystick has a hole in the ball that reflects the light back from the bulb to the photocells, depending on where you lean it. It is a very slight difference between moves, physically. If one of the photocells is 1mm to any direction, the range will change. He was able to get the range proper by nudging them here and there. In other words, if one of them doesn't go all the way to 0 volts, it's a simple matter of pushing that one photocell toward the lightbulb more.

The 204's features include:

4 electronically isolated 2-dimensional joysticks with output voltages proportional to lateral and vertical displacement. Generally used to control sound location, but may be used to control other parameters.

4 gain controls for signals applied to inputs. Control voltages may alternatively be used to control amplitude.

Control voltage inputs for defining positions of sounds. Increasing voltages move sounds from rear to front and from left to right. Voltages are generally (but not necessarily) derived from adjacent joystick outputs.

Monitor switches for use in conjunction with the Model 226 Quad Monitor Interface. 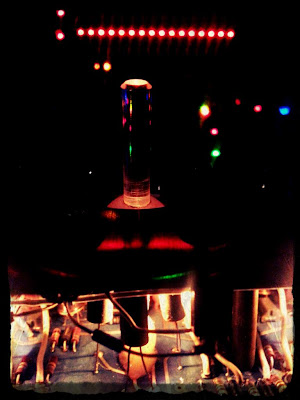 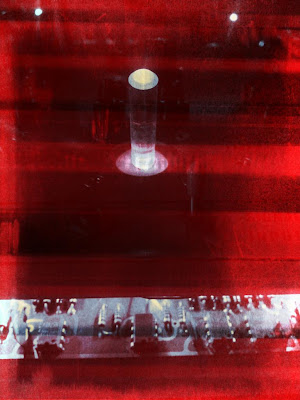 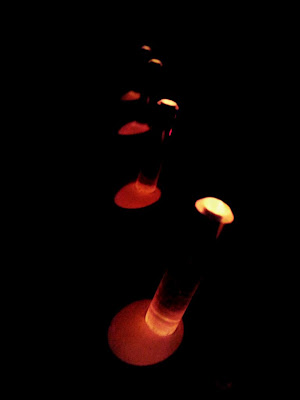 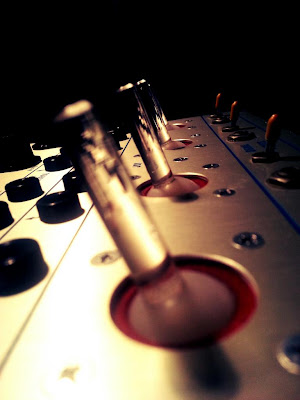 Wonderful Buchla Clones and DIY modules by jooksi. I have to say I really envy him for his dual version of the Flopsequencer. I have a singel one, the rest of the panel is empty. Would love to add something. Otherwise it would be a waste of space but I  have not decided what kind of module I should fit in there. Time will tell.

Note: go to his flickr to see more of his amazing DIY Buchla modules. 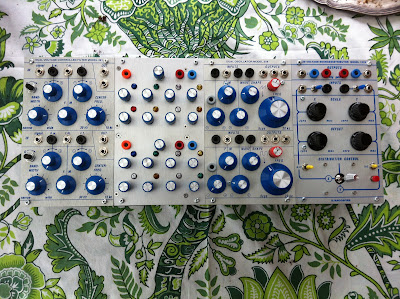 Djangosfire made some really nice mods for his Skylabcase. And walks us through his thought process on muffs. Thank you. Will have to do this as well when my Skylab arrives which is roughly three weeks from now.

Rather than building a stand alone "format jumbler" style jack converter...or losing a module space for a helper panel - I came up with a simple solution for my Skylab: modify one of the small back plates on the cabinet into a "Mult Plate"

Not much room on the little panel, but I was able to get 3 sections: 2x that had Tini-Jax, 1/4 & Banana and 1x with Tini-Jax to Banana.

Right off the bat this panel allows easy and clean interface with a Kenton Pro Solo II that i just picked up.

While I was at it - I also added 1/4 outs to the other backplate... which are tied direct with the 206e L & R main outs.... and added 1x more Tini-Jax to Banana converter

A few other ideas I'm considering that could be built into these little plates:

Here are some pictures of the work - Cheers - Adam 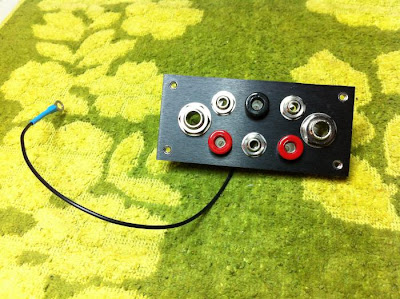 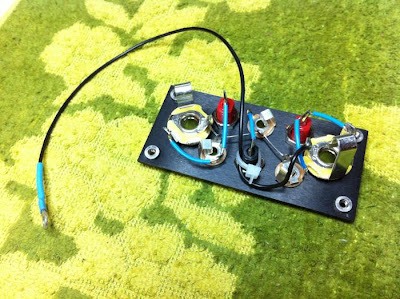 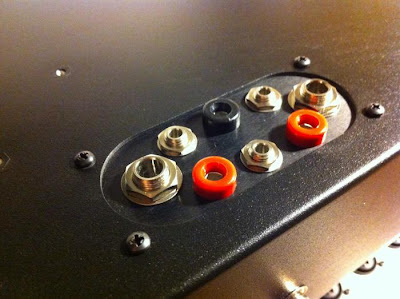 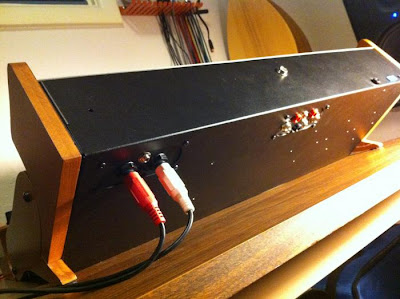 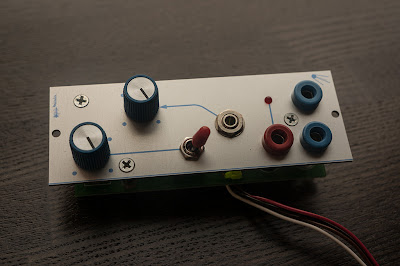 The second one is the singel Module Module of the timbre cercuit that can be found in the original 259. Perfect perfect companion for a 258 or 258v. But I am realy looking forward to use it with my 259e because sometimes I just want it to sound more analogue. I think the Timbre Module will deliver. This is the second batch as the first one sold out really quickly. 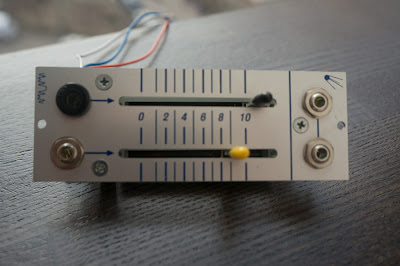 ps: the EF prototype-unit on the foto has unscratched metalfoto panel and ready to go with a 10% discount
Eingestellt von Abendrot um 02:52 Keine Kommentare:

I have been working on a new Sequential Voltage Source. It is only a single module space and packs a big punch. It does most of the things a MARF or ARF does, but without any menus. It can act as an 8 stage sequencer with two rows, voltage control of the clock/slide rate, switchable slides/pulses, pulse outs on each channel and the ability to loop from any stage to any stage.  It can act as a multi-stage envelope, up to all 8 stages with any stage as a sustain stage or any stage pausing unless a key is held. It can act as ADSR, AHDSR, HADSR, AD, AR, AHD, LFO saw, pulse, square, triangle, something more complex, LFO that only runs when a key is held, LFO that only runs when a key is lifted.
I wanted a small sequencer with every function on the panel. I wanted to do TB-303/MC-202 type sequences with slides selectable per stage, where the pulse output holds the whole stage on a slide stage but only pulses 25% of the stepped stages. I desperately scrambled to complete two for my performance during the NAMM show. I made panels from PCBs because they take less time to manufacture. I only got one finished and then it didn't work when I got there! Anyway, it's working now. It's pretty fun. 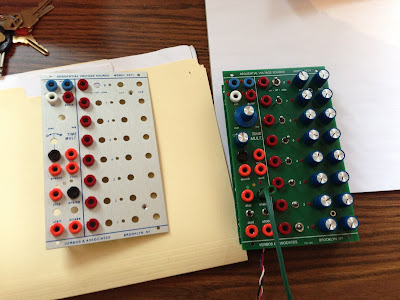 That's not happening everyday. Not one but six original Buchla 200 modules have surfaced today on ebay, including two of the most hard to find modules. The 237 Polyphonic Keyboard Module and the 204 Quad Spatial Director. If you have the funds, go get them as this is a once in your lifetime opportunity.

Adds voltage control and variable delay and duration times to the capabilities of the Model 280 (Four independent envelope generators with variable attack and decay times (range is .001 to 10 seconds) and a choice of sustained or transient operation. Input pulses initiate envelopes and optionally control duration time; output pulses, activated at end of decay, are particularly useful for advancing sequencers or looping to inputs to generate repetitive functions.).
All times are internally variable from .002 to 10 seconds; control voltages may be used to extend this range and control overall time while preserving envelope shape.

This keyboard provides the musician with the means to achieve direct expressive control of the Electric Music Box's many voltage-controlled parameters.
Model 237 has 37 keys (3 octave) and 3 voice polyphonic outputs; built-in processor allows polyphonic output voltages to be transposed or modulated by applied signals and control voltages.
Model features velocity and pressure outputs. Velocity output voltages are proportional to initial striking force; pressure outputs are actuated by applying pressure at bottom of key travel.
Key voltage outputs are equal interval -- any equal-tempered scale may be readily tuned with the processing and offset controls built into Electric Music Box oscillators. 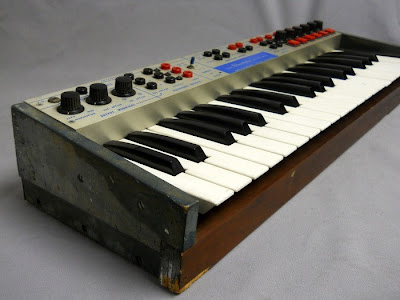 Voltage controlled quadraphonic distributor for determining the spatial location of sounds with pan pots or externally applied voltages. Monitor switches and voltage controlled attenuators are included.
The 204s features include:
4 electronically isolated 2-dimensional joysticks with output voltages proportional to lateral and vertical displacement. Generally used to control sound location, but may be used to control other parameters. 4 gain controls for signals applied to inputs. Control voltages may alternatively be used to control amplitude.

Control voltage inputs for defining positions of sounds. Increasing voltages move sounds from rear to front and from left to right. Voltages are generally (but not necessarily) derived from adjacent joystick outputs.

Go to ebay to see the rest of the modules.
Eingestellt von Abendrot um 17:58 Keine Kommentare:

Rick who is an expert in restoring old analogue synths, and who has worked on all the old Buchla instruments gives us another insight into the amazing history of the instruments Don Buchla has created over the last dacades.

found this photo from 2007 in a folder on my drive.. was the patch i used to record this piece: soundcloud.com/ava76/buchla-296-buchla-donald
note: configuration has been changed slightly since this photo, now one of 2 original 288s occupies the space to the left of the System Interface.

Q: whats the module left to the system interface?

...its the 298 Silicon cello/sax.. a recreation of the circuit stuffed in the silicon cello... a few were made in 2002 (by me) at the same time as the original run of barberpole modules. 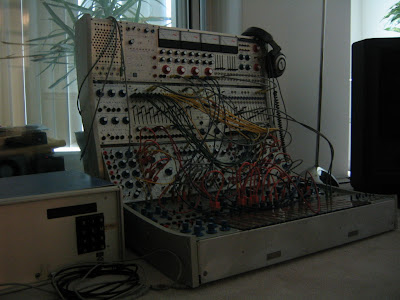 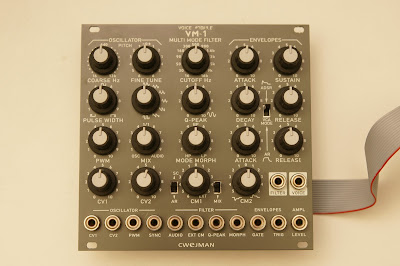 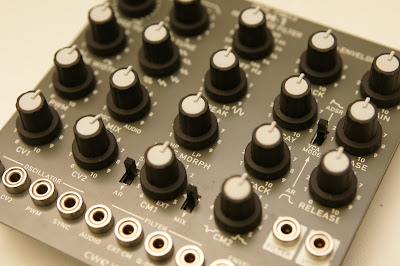 A new module module From Jason R. Butcher. Seems like a quad CV mixer. Looks very nice like all his modules.

From his Flickr: Nearing the end of this run limited to 8 units. All are spoken for. 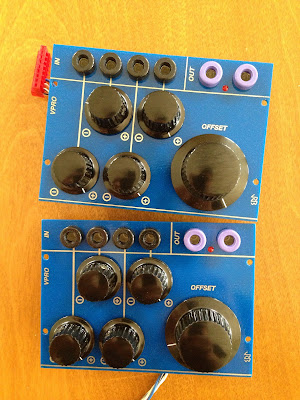